My journey into woodwork began out of desperation to leave a job I hated. In 1981 I dropped out of my Zoology degree course, disappointed at its content and distracted by my subculture’s zeitgeist – aptly summed up by Ian Dury’s song “Sex and Drugs and Rock ‘n’ Roll”. I fell into a string of uninspiring and unfulfilling jobs that included: toilet cleaner, warehouse man, working on a chrysanthemum nursery, a laboratory technician in a cottage cheese factory and finally a work study officer for a shoe component manufacturer.

Escaping this last position, I declared “I’m going to make wooden toys!” despite having no previous woodworking experience. I purchased my first set of basic tools with the whip-round from my workmates and, nestled into the spare room of our flat, launched enthusiastically into seeing what I could make using off-cuts my father gave me from the building firm where he worked.

Aeroplane in box, yew and oak.

My first efforts were simple but passable attempts at cars, planes and sets of painted rings on dowel. A small work space became available on the opposite side of the street for £10 per week, so I jumped at the chance. Named “Atlantis” by its owner, a Dutch artist, the former church was occupied by several hippie creatives and their partners. Unfortunately, the bills exceeded the tenants’ willingness to contribute fully and the loss-making building was sold. 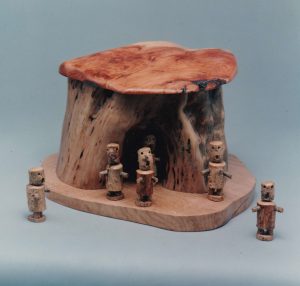 Troll house in yew and oak with boxwood trolls

I was offered a space in a cabinetmaker friend’s workshop, where he became my unofficial mentor and taught me invaluable lessons about tools, techniques and materials. Indulging my artistic temperament, I became more ambitious and creative in my designs. Between 1985 and 1988 I won three gold medals and two Richard Blizzard cups for toy making and a silver medal for carving at London and Bristol woodworker shows. Despite this, I struggled to earn enough to live on, so when my partner became pregnant and had to leave her job, I had to reconsider my position. 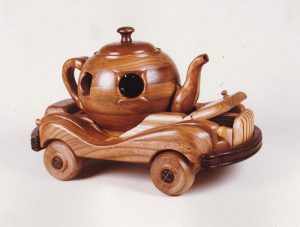 Teapot taxi, mostly elm. As the wheels turned the spout and seats inside (with jointed-limbed pixies) moved up and down,